A State Space model, is composed of:

It is specified by:

Dynamical Linear Models can be regarded as a special case of the state space model; where all the distributions are Gaussian. More specifically:

Often in the literature of State Space models, the symbol \(x_t\) and \(\theta_t\) are used interchangeably to refer to the state variable. For the rest of this tutorial, we will be using the symbol \(\theta\) unless otherwise specified.

An equivalent formulation for a DLM is specified by the set of equations:

for \(t = 1,...\) The specification of the model is completed by assigning a prior distribution for the initial (pre-sample) state \(\theta_0\).

In most applications, \(y_t\) is the value of an observable time series at time \(t\), while \(\theta_t\) is an unobservable state vector.

In the standard DLM representation of a simple linear regression models, the state vector is \(\theta_t = \left( \alpha_t\, ;\beta_t \right)^{\prime}\), the vector of regression coefficients, which may be constant or time-varying. In the case of time varying, the model is:

More generally, a dynamic linear regression model is described by:

A popular default choice for the state equation is to take the evolution matrix \(G_t\) as the identity matrix and \(W\) diagonal, which corresponds to modeling the regression coefficients as independent random walks

This model is used to describes dynamic of “straight line” observed with noise. Hence

In this section we will examine some of the functions used in the DLM R package. Using this package, a user can define the Random Walk plus noise model using the dlmModPoly helper function as follows:

Other helpers function exist for more complex models such as:

The previous helper function can be combined to create a more complex models. For example:

creates a Dynamical Linear Model representing a time series for quarterly data, in which one wants to include a local linear trend (polynomial model of order 2) and a seasonal component.

Also Two DLMs, modeling an m1- and an m2-variate time series respectively, can also be combined into a unique DLM for m1 + m2- variate observations. For example

creates two univariate models for a local trend plus a quarterly seasonal component as the one described above can be combined as follows (here m1 = m2 = 1). In this case the user has to be careful to specify meaningful values for the variances of the resulting model after model combination.

Both sums and outer sums of DLMs can be iterated and they can be combined to allow the specification of more complex models for multivariate data from simple standard univariate models.

Setting and Getting component of models

Filtering in the DLM package

Smoothing in the DLM package

Since we are estimating the parameters using the MLE method, there is not guarantee that the answer we obtain is the "optimal" solution. The common causes for this may be:

In order to gain confidence in the values return by the dlmMLE function, it's usually recommended that

One way of computing the Hessian matrix in R is to use the function hessian part of the numDeriv package. We will see a demonstration of this in example 5 below

The next example are taking from the slides prepared by Eric Zivot and Guy Yollin. See slides 12-13 for more information.

First we load the data as such:

Now that we have define a model, we can view its different component:

If we were to do a simple linear regression (Ordinary Least Square fit - constant equity beta), we would do something like

In order to define and estimate this regression using dynamical system model, we would use the Maximum Likelihood Estimation (MLE) method to estimates the 3 parameters: s2_obs, s2_alpa and s2_beta. We first start by defining initial values for the estimation methods

Now that we have an estimates for the model, we can build the "optimal" model using the estimates we obtained in the previous step.

Now that we have obtained model estimates, and build the optimal model, we can filter the data through it, to obtain filtered values of the state vectors, together with their variance/co-variance matrices.

Similarly, to obtained the smoothed values of the state vectors, together with their variance/co-variance matrices; using knowledge of the entire series

Now that we have obtained the smoothed values of the state vectors, we can draw them as:

Extracting the std errors and constructing the confidence band

And plotting the results with +/- 2 times the standard deviation 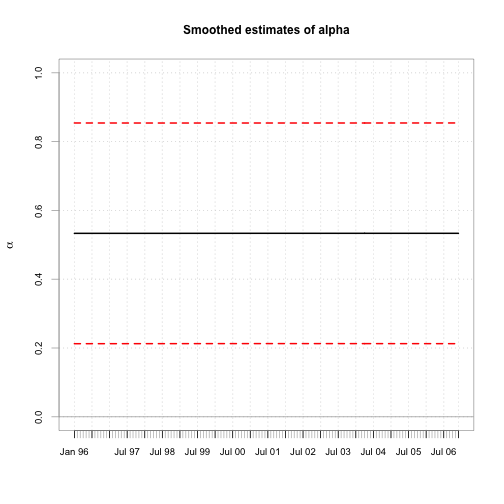 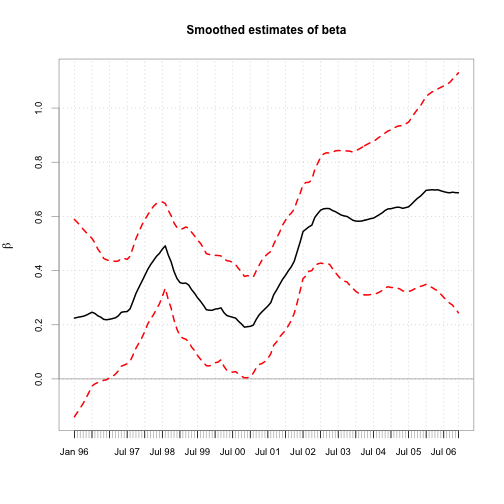 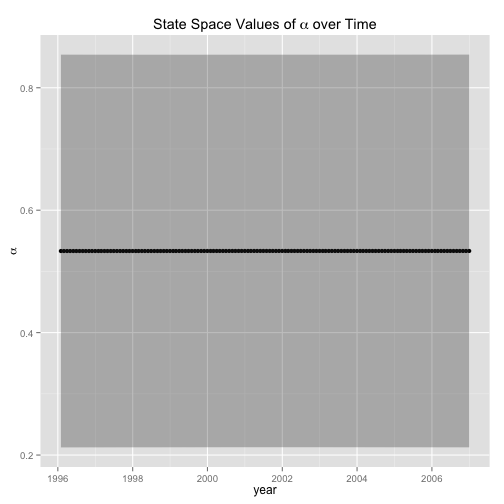 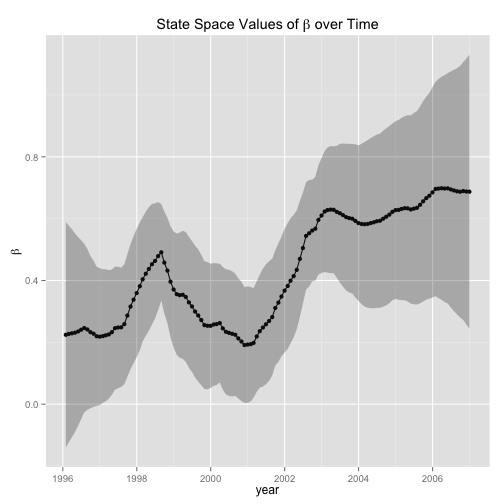 We will be doing a 10-steps ahead forecast using the calibrated model:

We did not use the function dlmForecast part of the dlm package for future predictions, since that function works only with constant models!. 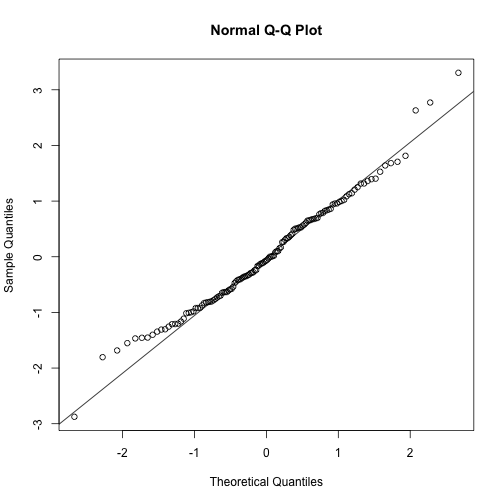 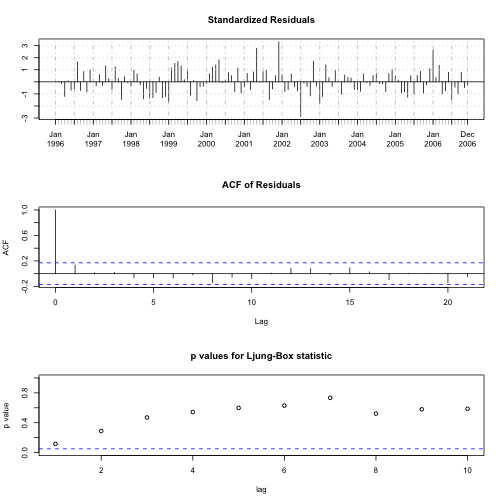 We start this example by plotting the data set. 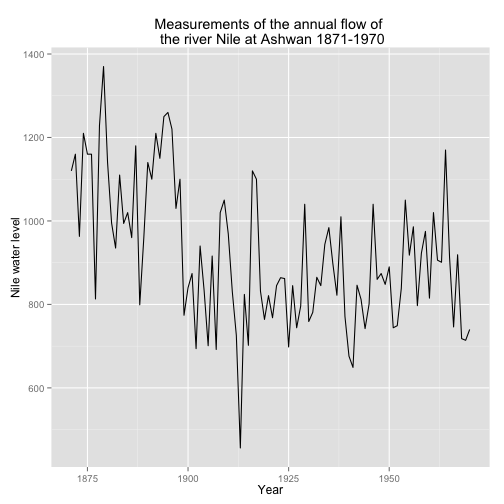 Next, we look at the effect of applying two different models with different Signal to Noise Ratio to the data, and see graphically, how well these two separate models fits the data (Pacomet, 2012). 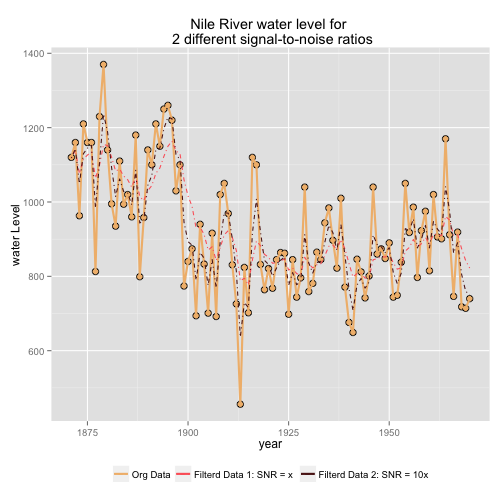 Next we fit a local level model, as described in example 1 above.

We construct and estimate this model in R as follows:

Finally, for the purpose of comparison, we build a Linear Trend model for the Nile data set

We validate the results returned by the MLE method and gain confidence in the results by examining:

Model selection for DLMs is usually based on either of the following criteria:

If simulation is used, as it is the case in a Bayesian setting, then averages are calculated after discarding the burn-in samples (Petris, 2011).

In this next piece of code, we compute these various statistics

The following table summarize the results of the different model applied to the Nile data set.

As we can the Damn Effect model is the best model out of the 3 models considered.

SUTSE is a multivariate model used to describe univariate series that can be marginally modeled by the “same” DLM – same observation matrix \(F_0\) and system matrix \(G_0\), p-dimensional state vectors have the same interpretation.

For example, suppose there are \(k\) observed time series, each one might be modeled using a linear growth model, so that for each of them the state vector has a level and a slope component. Although not strictly required, it is commonly assumed for simplicity that the variance matrix of the system errors, \(W\) is diagonal. The system error of the dynamics of this common state vector will then be characterized by a block-diagonal variance matrix having a first \(k \times k\) block accounting for the correlation among levels and a second \(k \times k\) block accounting for the correlation among slopes. In order to introduce a further correlation between the \(k\) series, the observation error variance \(V\) can be taken non-diagonal.

GDPs of different countries can all be described by a local linear trend – but obviously they are not independent For \(k\) such series, define the observation and system matrices of the joint model as:

where \(I_k\) is the \(k \times k\) Identity matrix, and \(\otimes\) is the Kronecker product. The \(pk \times pk\) system variance \(W\) is typically given a block-diagonal form, with p \(k \times k\) blocks, implying a correlated evolution of the \(j^{th}\) components of the state vector of each series. The \(k \times k\) observation variance \(V\) may be non-diagonal to account for additional correlation among the different series.

Consider GDP of Germany, UK, and USA. The series are obviously correlated and, for each of them – possibly on a log scale – a local linear trend model or possibly a more parsimonious integrated random walk plus noise seems a reasonable choice.

Note the log-Cholesky parametrization of the covariance matrix \(W\) (Pinheiro, 1994), in the buildSUTSE function. Looking at the estimated variance/covariance matrices:

The first three columns of gdpSmooth$s contain the time series of smoothed GDP level, the last three the smoothed slopes 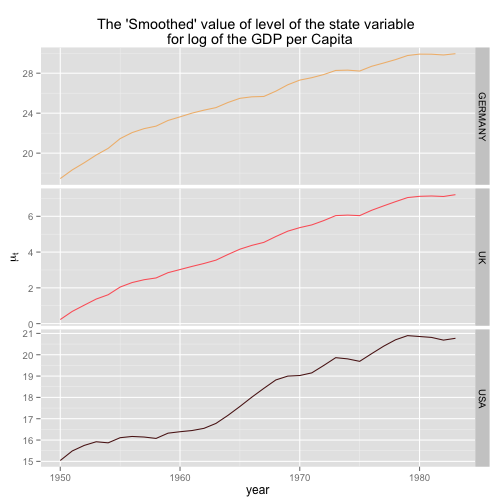 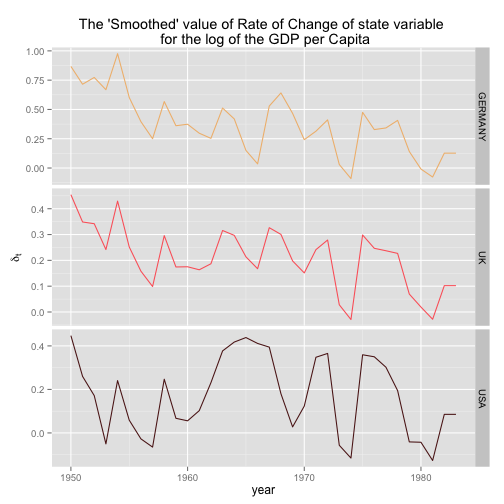 Building on top of SUTSE, the next example we will consider is the multivariate version of the dynamic Capital Asset Pricing Model (CAPM) for \(m\) assets.

where it is sensible to assume that the intercepts and the slopes are correlated across the $m$ stocks. The above model can be rewritten in a more general form such as 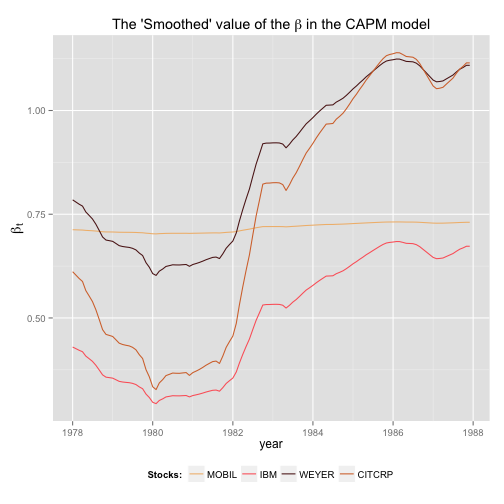 Note: In this section we will use the parameter \(x\) instead of \(\theta\) to indicate the state since it's more common to use \(x\) as a variable in this kind of analysis.

We will use the GDP data, used in example 6 above, and consider two factor models: one where the dimension, \(q\) is \(1\) and another where the dimension \(q = 2\). We will describe the dynamics of the GDP time series of Germany, UK, and USA; so \(m = 3\) in this case. The factor(s) in these two models is (are) modeled by local linear trend model. Recall, that in a 1-dimensional DLM that is modeled as a local linear trend, the number of parameters, \(p\) is 2 (see example 3 above).

As a result of this choice of models:

Furthermore, we will assume that the factors are independent of each-other; therefore since they are normally distributed, their independence implies 0 linear correlation. We will also assume that, for each factor, the correlation between their level \(\delta_t\) and their slope \(\mu_t\) is 0. In Essence the matrix \(W\) is diagonal

We start this example with the estimation of the loading in the case of 1-factor model.

Next we consider the 2-factors model:

Finally we use the Akaike information Criterion to compare the fit of SUTSE, 1-factor and 2-factor models to the GDP data.

Based on the AIC, the SUTSE model seems to fit the data best.

In this post, we have covered the topics of linear state space model (and the corresponding dynamical linear model) that are governed by Gaussian innovations. We have looked at how to construct such model in R, how to extend them from the univariate case to the multivariate case and how to estimate the model parameters using the MLE method.

In the upcoming post, we will cover the Bayesian formulation of such model, the usage of Monte Carlo Methods to estimates the model parameters.

Citations made with knitcitations (Boettiger, 2014).